In a modern train such as the SNG (CAF Civity-platform) of the Dutch railway company NS, there are thousands of sensors that collect billions of pieces of data every day. Besides allowing trains to run well and ensuring the functioning of all systems onboard, much more can be done with the data, believes NS, such as preventing defects or fixing those that do occur.

For many years, the breakdown service of car manufacturer Tesla has viewed a car’s technology from a distance, erasing defect reports and where necessary loading software updates. In theory, it is possible to do the same with trains, but until now this has been nothing but a distant dream. “We all look at the systems to be able to make the right diagnosis and then support train personnel to solve defects”, explains Falco Mooren, Project Manager at NS Techniek, the technical division of Nederlandse Spoorwegen (NS). “But the risk of cyberattacks is too great to make changes remotely, digitally, to a train that is on the tracks.”

Yet Falco Mooren does not rule out this happening in future. “You can do an incredible amount with the data that you can get out of a train and can feedback into it. But you need to decide where to start.” At NS, the first plans to use train data for hardware maintenance and repair emerged in 2016. The idea of doing this is of course not new. Almost every rolling stock manufacturer can deliver a related system to monitor their product. But a generic system for all locomotives and carriages that the NS began using was new.

“Every supplier has their own solution, but we have hardware from seven different manufacturers”, explains fleet analyst Marco Schulte. “It’s impossible to work with seven different systems. That’s why, back in 2016, we launched a European tendering process for an overarching system. The contract was won by Irish company Trimble, and we developed a system together with them. We worked with existing components as much as possible, but some components had to be specifically built for NS.”

According to Mooren and Schulte, it was impossible to adopt a complete, existing system from abroad that was suitable for rail companies. “It turns out that here in the Netherlands we are far ahead of other countries and operators, so there was nothing out there that met our needs.” Besides Trimble, other companies including CGI, IBM, NOMAD, KPN, Ricardo Rail and Strukton were involved in the project. ”In total, we worked with seventeen suppliers from fifteen different countries.” The first trains were coupled to the system in 2018.

At the time, the SLT (Spinter Lighttrain built by Bombardier and Siemens) was the latest train series, and so it was the most obvious choice. Now, all 131 of these trains are connected to the Real Time Monitoring (RTM) system. The Sprinters New Generation (SNGs) from the Spanish manufacturer CAF were also immediately coupled to RTM upon delivery. Out of the double-deckers from the VIRM series, 40 per cent of the 176 trains are connected. Of the Bombardier Traxx locomotives, only the 65 belonging to NS are linked. Finally, RTM is now used to monitor the 50 trains from the DDZ series, and the future Intercity New Generation (ICNG) by Alstom will be connected to the system too.

Fleet analyst Schulte: “As the helpdesk for train personnel (MBN), we see the same messages on our screens that train drivers see. When we are called by train staff, we no longer need to explain where they need to look to give us an image of the defect in order for us to solve the problem. We can now check it ourselves and give drivers instructions over the phone to get the trains moving again or to ensure they do not continue their journey when they have a serious defect.”

One of the people who use the system on a daily basis is Yunus Toy, a technical specialist from the SLT core team. With it, he can see what the maintenance history of a particular train is and if it had defects in the past. There is often a pattern of recurring defects. “We can also rewind to look at the behaviours of a train in order to see what happened when a defect first occurred. While in the past you had to ride on the train yourself, you can now see how a train behaves during the journey and take measurements. With a stranded train, there is, in any case, nothing else you need to see.”

For Toy, the main benefit of the system in terms of time-saving is that he is no longer reliant on a second-hand description of defects. In addition, he no longer needs to go to a stranded train on location to determine whether it can be repaired where it is or must be towed away. Moreover, when Toy goes to a train he already knows what the problem is, so he can bring the right tools and parts with him. “People sometimes joke with me, saying I have half an SLT in the back of my van, but in reality that is actually more or less the case. Everything can break and sod’s law dictates that you will not have the right part you need to get the train moving again.” If you do not have the right part with you, valuable hours can be wasted.

Overall, the biggest benefit of the system is that with the help of real-time monitoring a train can be taken to the workshop before it completely breaks down, and the engineers know exactly what must be done and what parts they need. As a consequence, the train can be put back into service more quickly. “At the moment, a train goes into the workshop for maintenance at regular intervals, but what we are aiming for is dynamic maintenance”, says Schulte. “This means that the train itself indicates when maintenance is needed and things are done on the basis of the actual condition of components rather than their estimated lifetime.” 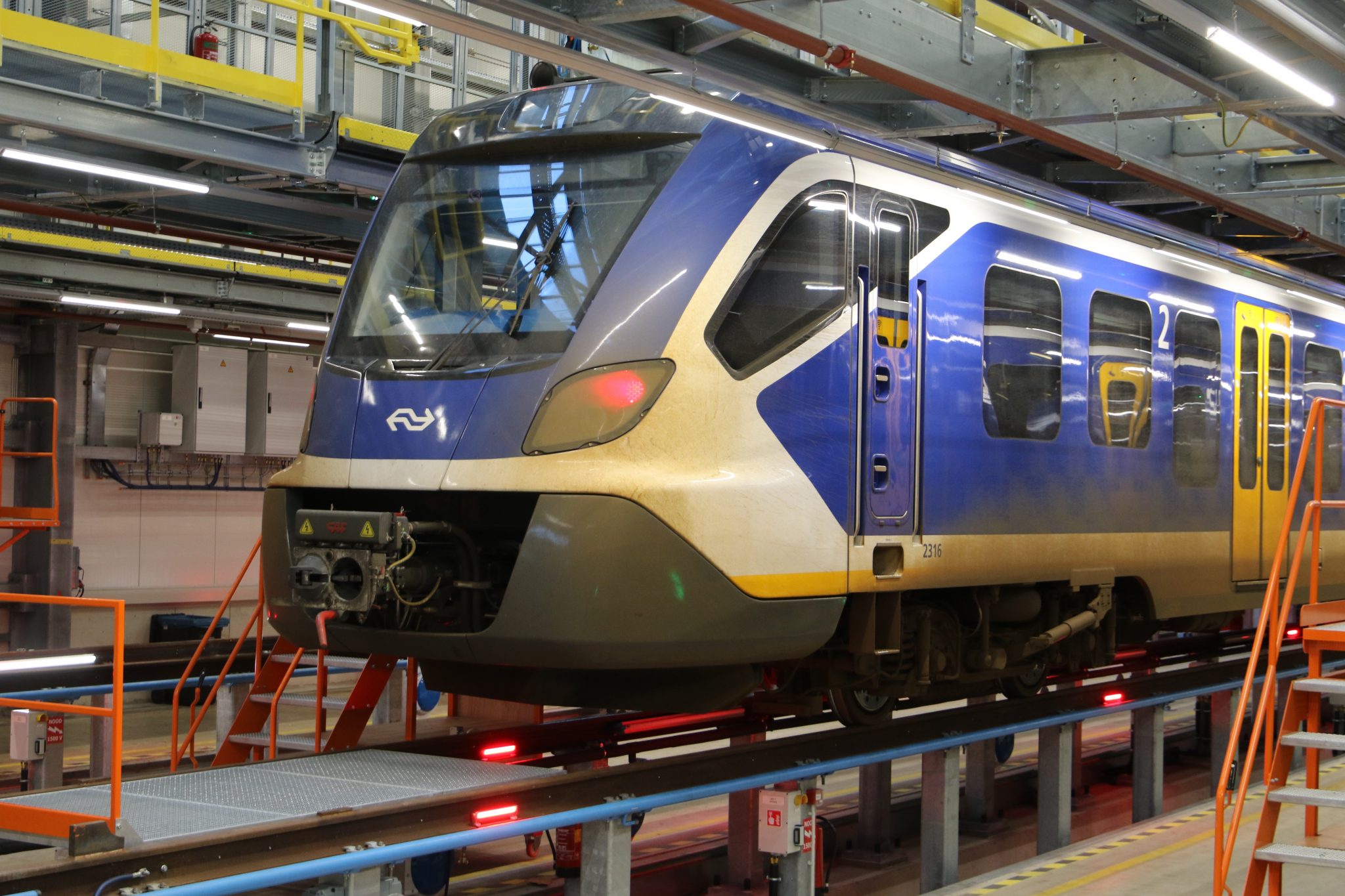 How does the system work? All data is sent via the OBIS network to the trackside. This is the same data connection that NS uses for passenger information and Wi-Fi. “We extract data from the on-board computer in real-time. As the train generates its own error messages, we can immediately see what has happened”, explains Schulte. “In the past, we had to wait until an engineer got on board. Problems only came to light during maintenance, or when reported by train personnel. When we developed this system we spent a lot of time mapping out business processes, so we could streamline maintenance and deliver other services too. This allowed us to truly work out what data was relevant for train maintenance and repair.”

As an example of the speeding up of processes and improvements in service delivery thanks to RTM, Schulte talks about train toilets. “When a broken toilet is not reported until 48 hours later, at least 60 people have wanted to use it in the meantime. The repair itself takes just as long, but as the report comes in earlier we can repair it earlier too. Furthermore, we share data from the trains with partners such as ProRail. For example, when the signal from the balise on the track weakens we can see that in the system. By reporting that to ProRail they can fix it before it completely stops working.”